Skip to content
The château du Riau, a beautiful property

Situated on the borders of the Bourbonnais, the Nivernais and the Berry, north of the Auvergne region, the château du Riau has been considered a Historic Monument since 1943. It encapsulates a harmonious ensemble of the 15th, 16th and 17th centuries.

Built upon a feodal hill, the Riau is equipped with a complete fortified wall and surrounded by whitewater moats. One enters the château’s courtyard by drawbridge and through an imposing entry tower flanked by two turrets. The outbuildings and the dovecote serve to complete the ensemble, thus protecting the classically-finished main building in the background.

Beyond the walls, illustrating the importance of the Riau seigneury, stands a barn, an exceptional building constructed during the second half of the 16th century, a treasure of the château and a paragon among tithe barns from that period in France. The carpenter, Nicolas Roger, completed his work in 1584.

The entire history of the fiefdom is contained in the château terriers, preserved here since 1308. The Riau belonged successively to Pierre de Puichevalin (1300), to the Breschards, to Guy de La Perrine (1435), to Guillaume du Val (1456) then finally to the Popillons from 1480 to 1700. The Charrys, a powerful family from the Nivernais province, kept it until 1800. In 1826, it became the property of the Le Roy de Chavignys, then the Duryes, their descendants, also descended from the Popillons.
Neither foreign nor civil wars, neither revolutions nor time, nor even its owners had either the audacity to destroy it or the means to transform it.

Beneath its roofs wander the ghosts of Pierre Popillon, Chancellor of Bourbonnais, and his teacher and friend, Charles de Bourbon, constable de France, unlucky hero of Bourbonnais freedom. In addition, there are the spectres of Anne La Grande, Duchess of Bourbonnais and Auvergne, as well as Admiral de Charry and the famous English guest, Arthur Young—who, during his travels in France, described the Riau with admiration in 1789—and finally, Pierre Le Roy de Chavigny, Prefect of Allier, who purchased it in 1826. 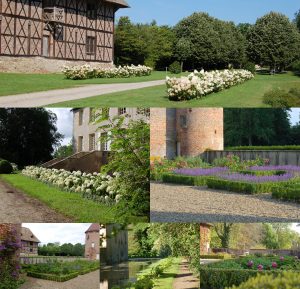 About the gardens…
The symbolism of the medieval garden is found in its squares, which are the icon of perfection. These squares contain a wide assortment of plants: medicinal, culinary and ornamental.
The 14th and 15th centuries saw the blossoming of courtly love, the idealisation of thought and the spiritualisation of love. Gardens evolved and were coloured with more decorative plants, of which the rose would come to embody the spirit of the movement.

After passing through the entry towers, an immense courtyard unfurls before you, adorned in its centre by a magnificent 300-year-old linden tree.
There you discover a medieval inspiration garden whose boxwood squares house rosemary, heritage roses and tree peonies.
At every corner, three boxwood spheres finish off the ensemble. Four white Japanese wisterias, cultivated into trees in orangerie pots, stand guard on each side of the château.